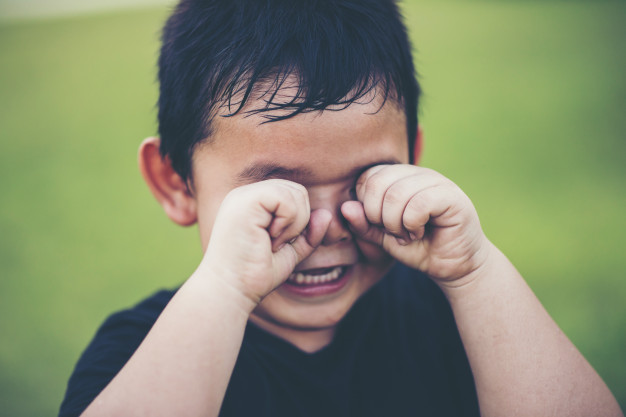 Beating Monday blues, I had a tough time with my two-and-half year old. My baby girl, Nihita was refusing to stay with her grandparents. It’s our everyday routine to drop her at her grandmother’s place after the preschool. Until a couple of days ago, my little one was someone who I thought was pretty self-sufficient. But offlate she has become cranky and stubborn. She refuses at times to go to her playschool and sometimes she doesn’t want to come back from her Preschool. She has turned to be a super tantrum master when she is out with us visiting friends or relatives. She even refuses to eat at any place other than her home. Did you find yourself in similar or one such situation? Most parents do!

Patterns of child’s temper are a myriad mix of emotions that they’re unable to express in words. Tantrums are very common in the age group of 1-5. When children feel they are not attended, or things are not done according to their wish, it makes them angry in different ways. They will throw things, they will scream, they will cry and so on. Parents in such circumstances should not react in the same level or punish the child as this hurts their emotions and makes them stubborn.

HOW TO DEAL WITH YOUR BABY’S TANTRUMS?

There are various ways to diffuse a child’s tantrums. Firstly, avoid saying ‘NO’ instead keep a deal or set a right time for the concerned demand. Example, a child is demanding for candy in a supermarket instead of straight away saying a no u can say ‘u will get a treat after dinner if you do my little help in eating fast’, even after such situation begging ensues you can give a choice, I say, ‘u can have candies after dinner or no candies’.

Keeping a deal or saying no should not be made a habit, consider a yes sometimes if required. Example : if he/she wants to ride in shopping cart after his/her shopping limit has ended , give them both bad and good look and let them do as it’s not annoying anyone in the supermarket.

Give them a task to engage themselves and make them responsible, it makes child happy and you can deviate their mind. Parents should try to validate their feeling by acknowledging them example: if the child is crying for not having the toy which his friend is having, say them ‘ok, ‘this is the reason you are crying’ but if you ask the permission nicely and play together he will give you the toy, instead of just making him quiet.

It’s no surprise that child is more likely to get cross if they are tired or hungry. Ask them for some snacks, snacks make everything better.

At home try reward chart- Reward can be very handy parenting tool. Let the child buy the chart of their own wish and say them that if they behave nicely they will get 2 stars, if eats on time and properly 4 star and for the respective counting give them some gifts or treats at the end of the day.

Each parent has their own experience of their child’s tantrums and they deal accordingly. There are numerous ways and tactics through which parent can calmly deal with the situation along with a lesson for the child instead of looking for a witness around or carrying on monotonous routine for the situation. Ask them questions for their problems; let them show their anger in different ways, make amends that suits your child. Finally, and most importantly, treat yourself to some much-deserved “me” time!

WHY CIRCLE TIME IS IMPORTANT IN PRESCHOOLS?

School-day wake up routines can be hard for both parents and children. After the holidays when kids stay up late...