How to raise sensitive sons and fearless daughters? 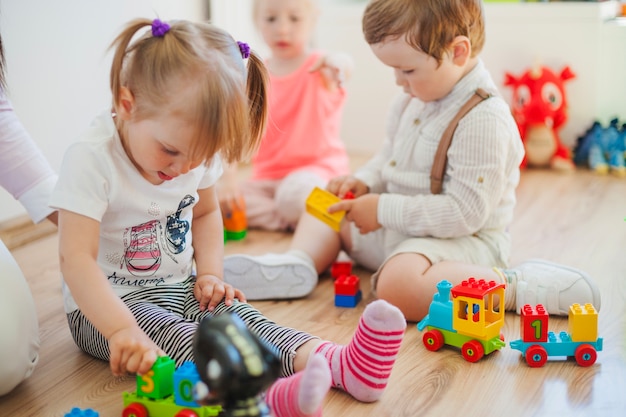 Gender stereotyping is messing with the kids. It’s not just one movie, it’s not just one TV show, it’s constant exposure to the same dated concepts in the media over and over, starting before preschool and lasting lifetime- concepts like ‘boys are smarter than girls’, ‘superhero’s big muscle or a princess long hair’, and so on. According to the socio-scientific research gender stereotypes in the movies and on the TV shows are more than persistent , they are incredibly effective at teaching kids what the culture expects of boys and girls.

As early childhood experts know the importance and impact of play; kids get a lot of ideas early from play about what they can do, what they like and what they can aspire to. By making those themes gender specific toys, it leaves out a whole range of possibilities to develop different skills. They limit children’s choices affecting their self-image and self-esteem and limiting their expectations. We have found that toys and books marketed to girls are more focused on themes of beauty, imagination, caring, cookies and feature more passive play and stories and that for boys it’s more focused or mainly based on themes of action, adventure, space and transport. Boys are being directed to play that is active and spatial, investigative and use their gross motor skills and girls play is supposed to be passive, relational, and domestic and about appearance.

ENCOURAGING CHILDREN TO THINK FOR THEMSELVES

It needs to be ensured that all children get the opportunity to experience different types of toys to allow them to develop a range of skills for the future. Here are some ideas to encourage children to think of themselves as individuals rather than editing their choices through gender filter.

You can help children by affirming unconditioned choices, reassuring them that its okay to be different and encouraging a culture of acceptance.

CHALLENGING STEREOTYPES WHEN YOU HEAR THEM

When you hear stereotypical comments, try to offer counter examples from your own experiences.

We often segregate children during play assuming that our child will have more in common with children from the same gender. When you organize mixed gender play dates at an early age, both girls and boys learn from each other. In a longer run, this will help children to maintain healthy relationships with children of the opposite gender.

PROVIDE A RANGE OF ROLE MODELS

Give your children real life examples. Let them come across female fire fighter, male nurses or female police officers that will help break any limitations in their head with regards to gender specific roles.

MAKE THE MOST OF THE BOOKS

Stop labeling sections as girls or boys. Let them identify their choices and go for it and explore the areas instead of sticking to a particular generic type.

Small changes like saying ‘children’ instead of labeling ‘girls and boys’ and having same rules for girls and boys in play, sports and education can help to uplift the things we have in common or things we can collectively win over rather than showcasing differences.

To this question raised by the teacher, a room full of early learners grabbed their color pencils and began penning...