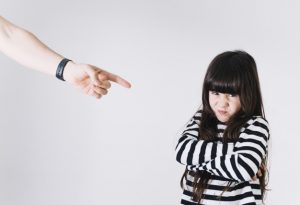 Most parents deem it impossible to discipline their child without punishments of different natures. The act of punishing a child during early years of development, no matter how mild in nature, has a deep impact. Given below, are some reasons to stay away from these practices.

1. Behavioural development is age appropriate. Children at young age lack self-control as their brain is not well-developed yet. So if your child is throwing food, refusing to sleep, whining, and tantrums, it is a result of an underdeveloped brain and not calculative attempts to test your limits.
In such cases, punishments have negative effects on the growing brain.

2. Compromising on the roots of empathy. It’s important to talk with them about their choices; help them recognize and understand that their actions have impact on others. Punishment hinders a child’s ability to understand and be sensitive towards the feelings of others.

3. Helping children learn conflict resolution and problem solving skills. Repair/replace things they have damaged; communicate positively; nurture emotional intelligence and differentiation in right and wrong. The fear of being punished does not allow a child to learn to deal with conflicting situations positively.

4. Expressing one’s emotions. Developing their understanding of right and wrong and teaching them how to regulate their emotions, helps us, as parents. If they’re angry or upset they should express it verbally and not by physically unleashing frustration. Punishment prevents this expression and seeds frustration.

5. Developing values than sheer obedience. If you’re always unnecessarily micro-managing children and demanding them to follow your rules, you are raising blind obedience and not allowing development of values.
While the goal is to get children to do the right thing, causing them discomfort or forcing authority might not be the best way out. In order to get children do the right thing or become well-behaved kids the key isn’t punishment; it’s discipline!

Discipline is something that needs to be taught, not forced through punishment.
Allow the child time to sit and reflect over his / her actions. Children who purposely misbehave are giving you a heads-up that something isn’t going right within him/her. Never overlook such behavioural patterns and try to address the child’s emotional needs.

After approaching many schools I can say Firstcry Intellitots Preschool as No.1 Preschool. As my sons, Arya is energetic the...